Opening the mailbox to find a card inside is exciting and brings a smile. Colette Paperie does just that with a humor-based line of greeting cards. Keli Spanier, a Northern Kentucky native, channels her fun attitude into designing cards that make people laugh. “I’ve always been kind of addicted to cards. That’s really where it started,” she says.

“There are so many people that would just love to get [a card] in the mail. My cards all have bright, colored envelopes. I’m always kind of, this pop of fun in your mailbox kind of thing,” says Spanier, owner of Colette Paperie.

Earning a design degree from Columbus College of Art and Design, the spunky Spanier initially began her career in fashion design.

“I had corporate jobs and they were just terrible. It was really not a creative job, even though it was the most creative job you could have, but it wasn’t,” she says. Then her mom became terminally ill. She quit her job to be with her. That time allowed her to escape the routine she felt stuck in. After the death of her mother, she spent a short two months back at work, but then quit her job for good and began her business.

“I crept into it slowly,” she says.

Her business boomed and ten years later she has greeting cards in over 500 stores nationwide. Colette Paperie is in individual boutiques and small businesses. “It’s really cool, a small business working with a small business. I really enjoy that aspect,” Spanier says. 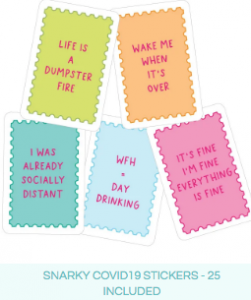 Spanier is a one-woman show, designing and creating the cards from the wording, illustrations, and printing.

“I just really enjoy doing it. It’s my little baby,” she says. Reveling in her work is important to her. She laughs as she says nothing has changed this year, working from home with her husband. Laughing harder, she jokes about making a card about all those people wanting a divorce now that they have been working from home with their spouse for so long.

“I’m working right now on Valentine’s, which is my favorite season. I should like Christmas better, but I like Valentine’s, I feel I can get really crazy with it,” she says. It is easy for her to get into a “really silly” mindset so that her creativity can flow into crazy. “That’s really what is rewarding to me, it’s really fun,” says Spanier. Almost all her cards are humorous, every now and then adding in a “nice” one. 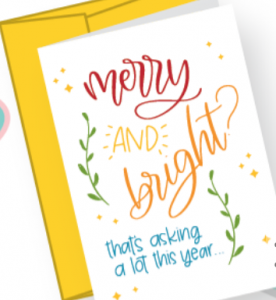 Finding what people are laughing at is where Spanier looks for inspiration.

“I do draw from what the state of the world is,” she says.

She finds the climate and pulse and then goes with it.

“My holiday cards are really focused on how much 2020 is terrible,” she says.

She makes jokes out of the everyday things people are complaining about like pants not fitting.

“It’s pretty fun. I’ve been trying to think of how I can incorporate that into Valentine’s because I’m not really sure what it will be like in February, but I feel like it’s still going to be pretty fresh,” she says. 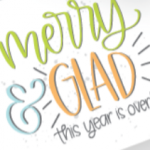 Giving back to the community is something she is adamant about. A few years ago, she and her husband, had a play area built at Hospice Care of St. Elizabeth Healthcare. Now, she is focusing on Go Pantry. She designed a line of COVID cards, and all the proceeds from three months were donated to Go Pantry. They also had food drives and received around 5,000 food items that were sent to them.

All of Colette Paperie cards are available online from her website. Spanier also has a line of notebooks and a couple of coloring books she designed. And, she has stickers. Laughter erupts again.

“I’m hoping to get more stickers because people actually buy a lot of stickers, which makes me laugh. We’re all like 8-year-olds at heart,” says Spanier.

Owning her own business not only provides an outlet for her vibrant personality to shine but also peace.

“I don’t want to admit it, but it’s honestly, I enjoy sleeping in and not having to get dressed and worry about what other people think of me and things like that,” Spanier says. 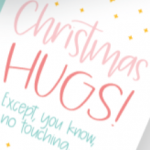 Being part of the workforce was a huge emotional drain for her. After she quit her job, she was shocked by how much energy she had. She found it interesting the amount of “brain space” she felt she gained.

“Your emotions are so wrapped up in your job and I think that’s the biggest thing is, I felt like a burden had been lifted off of me. I thought that was supposed to be the comfortable life, but it wasn’t for me,” she says.

“The crazier the better” is what Spanier likes to do in making cards. She wants people to read them, think you must send it to someone because the card is making you think about them, and you know they would love it.

Inspiring you to buy a card, stamps, and sending it, is what she enjoys.

“A lot of people have told me that, ‘Hey, I gave up card-sending and now I’m back.’ I love those kinds of stories,” she says. “The crazier the better.”