Bharti Airtel (BRTI), India’s 2nd largest telecom operator slumped almost -9.70% (from a recent high of 577.00 to 526.20) after mixed Q4FY21 report card and guidance warning. In Q4FY21 Airtel missed revenue and APRU forecast, but solid subscriber additions, higher data usage in COVID lockdowns/restrictions/WFH, and cost-cutting measures resulted in line with estimates core operating profit. Airtel’s operating revenue was declined by -2.91% sequentially (q/q) due to the changed regime of IUC (interconnect usage charge). But still, revenue gained +7.86% yearly (y/y), while at the same time, operating expenses slip -7.25% sequentially, while stays almost flat yearly. And thus EBITDA edged up +2.31% sequentially, while jumped +16.09% yearly. Also, due to lower debt interest outgo, EBTDA (Earnings Before Tax, Depreciation, and Amortization); i.e. core operating profit increased by +4.83% sequentially and +16.89% yearly. There was also some margin expansion for EBTDA in Q4FY21 at 32.90% vs 30.47% (q/q) and 29.68% (y/y). The EBITDA margin was at 47.90% VS 45.45% (q/q), and 43.62% (y/y).

Bharti Airtel said it hasn’t noted a ‘material impact’ from India’s COVID tsunami (devastating 2nd wave) so far, but will continue to monitor and evaluate changes in macroeconomic and other factors. As a reminder, in Q4FY20, the company’s bottom line was hit by exceptional charges related to longstanding telecom license/spectrum disputes with the Indian government.

As per Bharti Airtel, 20% of customers contribute to 80% of the business. The company is focusing on tapping the rest 80% of customers for which it is trying to insourcing the entire sales force which was previously outsourced to build digital channels and allied service areas.

During Q4FY21, the company launched Airtel Ads, Airtel IoT, and Airtel Safe Pay. It has a dedicated channel for high-value homes. Total high-value homes in India are around 50M and the company is in relation with around 30M providing at least one service.

Within India, Bharti Airtel has 33% of the share of the liberalized spectrum which is the strongest holding in India which can be converted to 5G over time. It has also accelerated its coverage footprint in this quarter by adding 8300 sites. The company’s ARPU grew from Rs 146 to 148 which is the highest in the country and is mainly on account of reopening, customer additions, and customer mix. Management expects growth in ARPU going ahead.

The company’s 4G customers were at 179.3M (NYSE:) at the end of March’21, up 13.7 million from a quarter ago and 43 million higher than the same period last year. The average data usage per customer stood at 16.4GB/month, while voice usage was at 1053 minutes per customer in a month. The total India customer base stood at 350.3M as March’21, up 4.2% sequentially and 13.1% yearly. As a reminder, Bharti Airtel is the country’s second-largest operator by market share. India’s mobile services apart, Airtel also expanded its home business. It added the highest-ever customers (274K) in-home business during the March quarter.

Airtel raised $12B in FY21 and refinanced high-cost debt with lower rates. DoT and AGR debt is 56% of the total debt while accounting lease contributes 19%. Debt has increased however company expects it to go down in years coming forward. The company has successfully monetized assets including Airtel Money and tower in Africa and also monetized unutilized 800 MHz spectrum.

Airtel has added around 16000 towers in H2FY21. Management-guided CAPEX will be the same as of FY21 primarily for the rollout of 5G and CAPEX on broadband business and 4G radio CAPEX. Operating capex increased on account of the massive rollout of the network. Airtel invested INR 51.41B in India operations, while the CAPEX for Africa business was at INR 15.46B during the Q4FY21.

AGR dues were amounting to INR 23.86B, which though are recorded as Debt Liability in the accounts but are not ‘incremental borrowings’ for the SEBI Circular. The net reduction in borrowing by INR 11.816B during FY21 is after accounting for additional term loan borrowings of INR 1.5B during the year.

EBITDA Margin on mobile business is around 45%; expected to reach 60% in the coming years.

Sequential growth of 15-20% every quarter and expects to show growth in FY22.

Airtel has 200M active users; expected to be EBITDA positive by FY22.

ARPU of Rs 684.00 dropped due to a pricing change done in Q3. Management guided sequential increase in home passes and in a couple of years it expects 20-25M home passes.

Airtel has a market share of 22% as of December 2019 and expects to it grow to 27%. Management sees strong upside in DTH business in FY22. Management has assured that the promoter has no intention of any block sale or selling of any stake.

ARPU continues to be the best in the industry—Q4FY21 at ₹145 versus ₹135 in Q4FY20 on a comparable basis—an outcome of the company’s focus on acquiring quality customers as well as up-trading and up-gradation of customers to 4G. Revenue from Airtel Business was up 9.7% y-o-y in Q4 on the back of strong demand for connectivity and solutions in the domestic as well as global market. The company continues to expand and grow adjacent verticals such as data centers, cloud, cybersecurity, customer relationship management platforms, and videoconferencing.

The homes business segment witnessed revenue growth of 5% y-o-y. The company’s focus on recalibrated offerings and the launch of Xstream bundles, with content and unlimited internet, to accelerate penetration has resulted in the highest-ever net addition of about 274,000 to reach a total base of 3.07 million.

The company is closely monitoring the covid-19 situation to identify risks and take immediate action to minimize any potential disruption from the pandemic to its business. Our focus continues to be on delivering uninterrupted services and a great end-user experience while ensuring the safety of our employees and partners.

It is this relentless focus on customer obsession that has allowed us to deliver another consistent quarter in terms of performance— Our digital assets continue to scale and we are beginning to see strong traction in the monetization of these assets.

As guidance, Bharti Airtel projected Rs. 200.00 ARPU in the medium term (FY: 24-25?) and Rs.300.00 in the long term against market expectations of Rs.192.00 by FY23. The company is relying on higher telecom tariffs and migration of many users to 4G from existing 2G/3G. Airtel CEO Vittal also said 5G rollout may be delayed in India to next year (FY23) due to the ongoing COVID tsunami and there is no intention by promoters to sell their stake, contrary to earlier market speculation:

We were earlier under the impression that the 5G auction could happen by December. With the pandemic that has hit us, I sense that the 5G rollout may get delayed by a few months. Whether this happens this fiscal or the next is something to be seen.

While this ARPU is the highest in the industry, it also shows the massive headroom for ARPU growth. I say this for two reasons. One is the very low level of tariffs in India. The second is the fact that we have 140 million users on our network who are not on 4G and whose ARPU is less than half that of the average of the business as a whole. In this (reported) quarter, we have restated our numbers, and in particular ARPU, given the abolition of the IUC regime. To make the ARPU definition even more stringent, we have eliminated the interconnect revenue as also the inter-license settlement between the circles. What it therefore means is that ARPU is now a true measure of customer revenue of the mobile business only.

The company’s balance sheet has improved due to an optimal capital structure and well-timed fundraising. Airtel’s new corporate structure, under which the telecom business has been hived off into a separate entity, while the digital assets have been merged with the parent, will allow the telco to sharpen its focus on digital assets. The company expects to cover around 2-2.5 crore homes through network rollout in the next couple of years.

The company has a lot of scopes to grow in the enterprise segment—We have moved market share from 23 to 31 percent in 2 year period. Given 80 percent of our business comes from 20 percent of our customers. There is real headroom here to grow our market share and move beyond 31 percent. Another opportunity is beyond connectivity and that is another Rs 50,000 crore opportunity. There is cloud communication business, second business is cybersecurity—we see the internet of thing platform as another promising area for growth in the next 5-7 years.

The company is seeing strong traction in its wireline broadband business with over 3 million customers. During the quarter we expanded our footprint rapidly to new towns and cities through our unique LCO partnership model, adding 1mn+ home passes. We are now present in 200+ cities. As a result, our net adds this quarter at 274K have been the highest ever.

The company is targeting to have 20-25 million home broadband customers in the next couple of years. Although the ARPU declined marginally to Rs 684 for home broadband, primarily due to the Rs 499-entry level plan, but going forward, it does not expect any further dilution.

The Q4 also witnessed increased competitive intensity among the operators to acquire customers. For the enterprise business, the company is in sourcing its entire SME sales force, which was earlier outsourced. This will lead to the up-gradation of our SME channel capabilities helping us gain share. Second, we are building our Omni-channel digital capabilities. Today, more than 95% of the new orders for the product lines where we have begun this effort are coming through digital channels—

I just want to emphatically state that both the Bharti family as well as SingTel have no intention of any stake sell down or block the sale. This is speculative. There is no intention whatsoever—

We are seeing some impact of the second wave of COVID. The impact is both psychological and emotional, which is related to fear and insecurity among customers. The second impact is financial pressures as migrants go back to the villages where incomes and livelihood have been destroyed. Some of them are consolidating their SIMs, using one SIM between their family—

There is also an impact is on customer acquisition because of reduced walk-ins in the stores— All of this we have seen. We also saw a sharp recovery in June—90 percent of India is under lockdown and 10 percent is under night lockdown or weekend lockdown. We are operating in a lockdown situation. Given the softness that we have seen in April, we are preparing for financial recovery as we see the market opening up. We saw that strongly coming though in June of last year—

Airtel issued a veiled guidance warning amid India’s COVID tsunami, which may affect mobile ARPU. Subsequently, the scrip suffered amid mixed Q4FY21 report card. But broadband (BB) business (high-speed affordable data) may be the thrust area in COVID pandemic, lockdowns, digital and WFH theme. Airtel’s strategic tie-up model with LCO (local cable operators) in non-wired cities coupled with an attractive unlimited BB package may help. Also, there is a question of BB service and quality, in which Airtel may be ahead of Reliance (NS:) Jio. Although R-Jio is now far ahead of Airtel in terms of market share due to ‘data is oil surgical strike’, looking ahead, R-Jio may not be able to ‘score goals in the empty field’; it will face immense competition from Airtel.

Considering all the pros & cons as highlighted above along with elevated debt interest/EBITA ratio, assuming an average PE of 8 and operating EPS CAGR growth around 15%, the FY23 fair valuation maybe around 583, while FY:24-25 fair valuation should be around 671-772. As the market will now discount FY24 valuation, Bharti Airtel may scale 671 levels by Mar’22 and 772 by Mar’23.

Technically, whatever may be the narrative, Airtel now has to sustain over 524-521 levels; otherwise, expect more correction as per below levels; below 499-494 levels, 480 is major support. 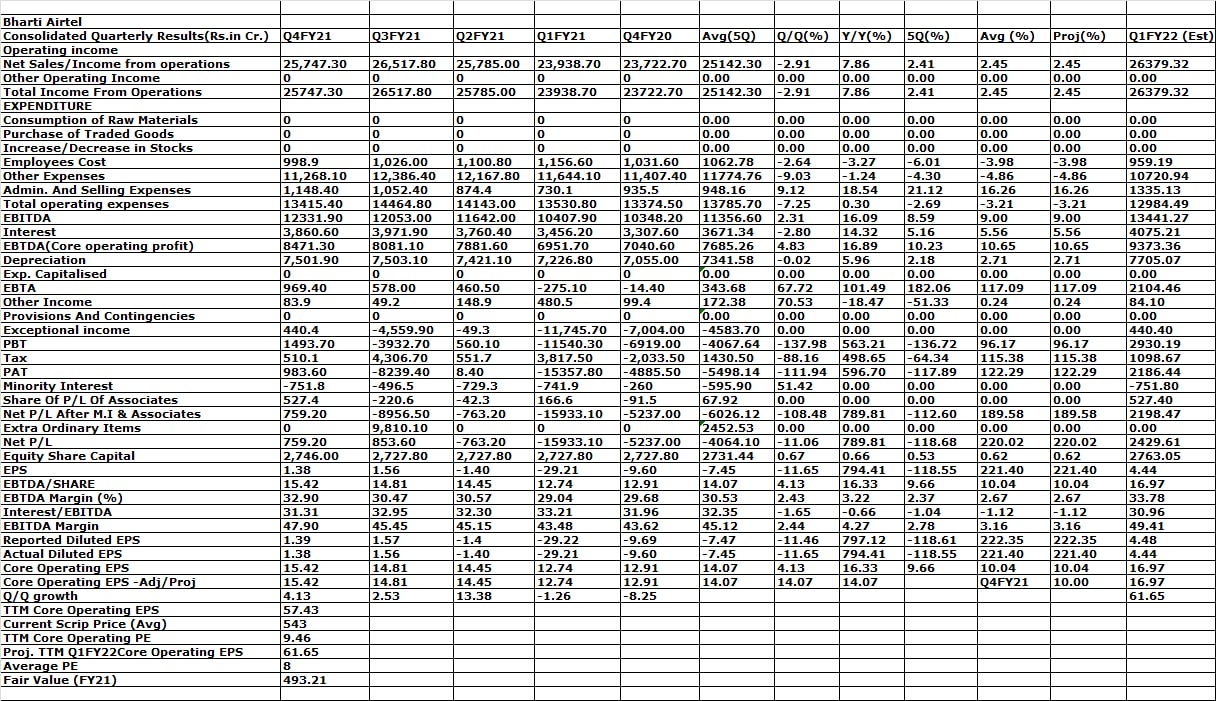 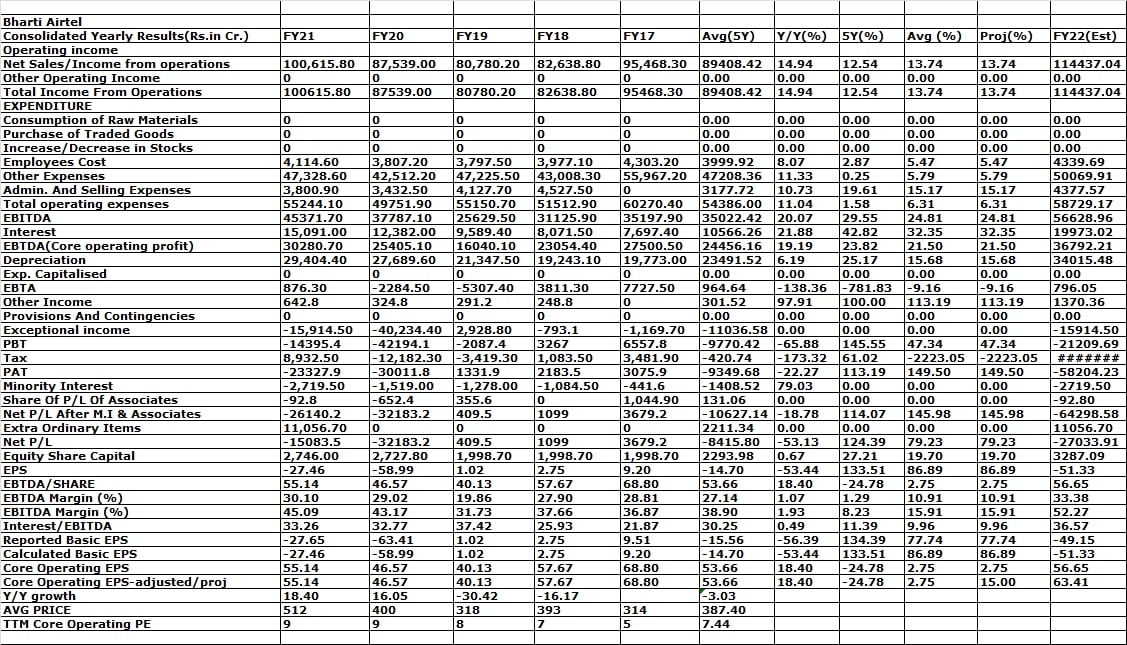